Celebrating the Completion of the Anglicare Lober Square Precinct 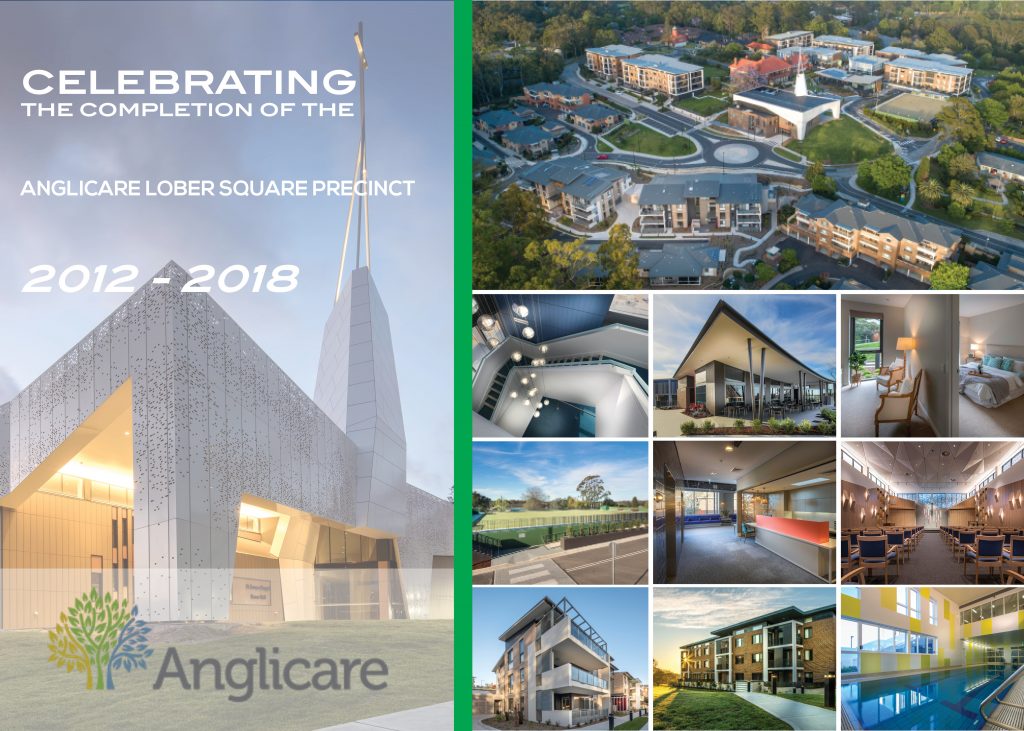 The end of 2018 marked a significant milestone for Lipman as we handed over the Anglicare St James Chapel, the final stage of the Anglicare Lober Square Precinct.

Over the past 6 years, we are very proud to have delivered a total of 130 independent living units across 8 apartment buildings, 8 luxurious villas, new health facilities including a leisure pool, hydrotherapy pool, administration offices and nursing facilities. The precinct also included a new a café, a suspended bowling green and the final Stage delivered the new St James Chapel, which along with Lober House is the centrepiece of the village.

All works were completed within a “live” and operating retirement village, where stakeholder management was paramount for a seamless delivery. Through open and honest communication, Lipman was able to form strong relationships with all project stakeholders, including the Anglicare project team, Anglicare property services, new and existing Anglicare residents and the wider project team including consultants and subcontractors. Through the establishment of these strong relationships, we were able to create a collaborative culture that is at the very core of our company values.

There are too many people to thank individually; as a team, we are celebrating the culmination of 6 years of hard work and take pride in the quality that has been consistently delivered that allowed for the successful delivery of the projects, with a combined value in the order of $100m.

Stage 1 – $41m (approx)
Lipman commenced its journey on the Lober Square Precinct in 2012 with the successful delivery of Stage 1; a fully documented project that consisted of a community centre, health facilities, a café, a bowling green, 35 independent living units, 6 villas, 3 x basement carparks, and all associated external works and infrastructure.

At the height of the project, all the buildings were being constructed concurrently and as such adept resource planning and allocation was paramount. To manage multiple work faces and ensure effective planning, quality controls and safety performances were being monitored and implemented, the Lipman team, consisting of 22 individuals of varying capacities and complimentary skill sets, formed an exceptional group. The team managed over 150 subcontractors daily across all facets of safety, quality and environment and were able to do this successfully through the implementation of our robust and mature systems. The team’s leadership skills allowed them to deal with the more adaptive challenges that are inherent with these types of projects.

During the course of the project and in collaboration with Anglicare, we were able to secure approximately $500,000 of savings through a value engineering process. This was achieved through constantly questioning the design, products and generally looking for better ways of doing things. This innovation through our partnership with Anglicare is something we are extremely proud of.

Toward the end of the project, Lipman spent significant time with the Anglicare sales team organising and coordinating resident inspections of the units during construction. With these inspections, being highly valued by Anglicare, we spent a significant amount of time ensuring safe and appropriate access was provided.

Upon completion of the project and in addition to the standard Operation & Maintenance Manuals generally provided, we also provided a resident handover pack that was tailored specifically for each resident including key rings with their surnames engraved on them. Anglicare noted that the quality of the handover packs, whilst only a small token, was something that resonated with Anglicare’s core values and the genuine commitment to their residents.
“The team worked hard to come up with the appropriate solutions for any challenges that were raised by the village operations or conditions on site. Decisions by Lipman were always felt to be made with respect to the Village needs and project objectives.

To sum up the project, we are very thankful to have engaged Lipman for this project. It was a complicated exercise and the level of cooperation and professionalism from the team was exceptional..”

Following the successful completion of Stage 1; the central hub of the development, Lipman continued on to deliver Anglicare Lober Square Stage 2.

The project consisted of the design and construction of 42 Independent living units and associated common spaces, including a basement car park, the landscaped podium area and drying courts.

The new basement car park was connected to the existing Health Centre that was constructed as part of the Stage 1 project. This connection offered convenient undercover parking with lift access to the health facilities for all residents.

By careful analysis of the Stage 1 product and in collaboration with Anglicare, the project team worked closely with the design team and Anglicare, to maximise the aesthetics of the buildings, to ensure they complemented the surrounding built environment, we were able to improve on what was already an exceptional product.

Again we were able to add significant value to the project through the value engineering process, which resulted in a total of $200,000 worth of savings being secured. These savings were generated through creativity, innovation and a willingness to challenge all aspects of the process, including design, construction methods, material selections and the status quo in project delivery.

During the labour peak of the project, we had approximately 90 people on site daily. Throughout the project and this period in particular, our team relied on our strong WHS&E systems and procedures. It was through the reliance on our systems that allowed us to achieve exceptional results on the project, culminating in the project team being awarded the “Lipman Gold Hat” (An award that recognises 100,000 hours of work without experiencing a Lost Time Injury).
“We have completed a couple of different projects with them now and whether it’s a documented project, design and construct or an ECI process, they’re prepared to get in the trenches with you and work through the problems.

When we visit the site meetings, PCG meetings, the design meetings and the more senior management meetings it’s evident that the culture definitely disseminates from the top and I believe the teams embrace it and roll it out with everything they do.”

Mowll Village, 2 & 4 Hilliard Drive forms the third stage of the Lober Square redevelopment following the successful completion of both Stages One and Two. Lipman’s early engagement under a D+C model ensured efficient construction techniques and delivery processes were utilised.

The Mowll Village Stage 3 redevelopment consisted of two apartment buildings with 32 independent living units and a common room. The buildings span over four levels and include a garage car parking area.

“There is that consistency with Lipman throughout the projects we have used them on, and that’s a really good thing for us. It’s an environment where we feel comfortable, it’s a ‘set and forget’ contract we can have with them, we know that they’re going to be honest, we know that they will do what say they will do and I know one of their catch cries is ‘One team. One Goal’ and I think Lipman make you part of that one team and we feel like that one goal is a group experience that Lipman is more than encouraging to involve us in.

You can see that their culture is instilled in each individual throughout the whole company, from their Managing Director all the way down to their labourers.”

Warrina 5 was Lipman’s forth project within the Anglicare Retirement Village at Castle Hill.

During the design development phase we were able to apply our learning from the previous three stages as well as implement some subtle changes to the building placement that significantly minimised the retention requirements along Hilliard Drive. Our intimate knowledge of the site also allowed us to develop efficient service strategies that provided the infrastructure for the Warrina 5 development but also for the upcoming Chapel redevelopment, minimising the need for trenching through new roads and footpaths.

The project represented another successful completion at the Lober Square site and further enhanced the relationship between Anglicare and Lipman.

After being established on the Anglicare Castle Hill site for 6 years, the last Lipman office was demobilised in December 2018.

Our time at Castle Hill was capped off with the delivery of the chapel project which has now become a central part of the village and real showpiece for Anglicare adjacent to the heritage listed Lober House and at the heart of the community precinct.

The chapel includes a number of features that were salvaged from the original church including the stained glass windows, the cross and the bell; which when rung can be heard from miles away.

The project involved a chapel and hall that combines for large gatherings via operable walls in the connecting corridor. The project scope also included upper and lower entry foyers, an extensive forecourt, back of house areas, 21 basement car spaces, connection into existing underground parking and a 32.64m steeple.

A vertically oriented terracotta façade was central to the architectural concept. Lipman reviewed eight ventilated terracotta rain screen systems to resolve this requirement. With the assistance of our consultant team, Lipman also developed an innovative weather seal within the ventilated cavity to mitigate any risk of water ingress.

Design development of the perforated aluminium ‘veil’ resulted in a rationalised sub-structure and perforation pattern that improved manufacture, assembly and safety outcomes.

Lipman’s review and development of alternative structural and services design ensured that the performance brief provided by Anglicare was satisfied and that a ‘best for project’ solution was delivered for our Client.

This project points to the value, trust, and certainty that the collaborative approach delivers for new and repeat clients alike and the photos of the chapel speak for themselves and display the commitment of the team in producing a bespoke, unique and high quality product.

“We get on really well with the Lipman team, particularly the Project Managers and we have developed really good relationship with them. They’re working on a number of our sites with us and we have found that throughout the organisation we are able just to ‘get-on’ and cooperate and they’ve become good friends of ours.”

Congratulations to everyone involved throughout the journey over the past 6 years and across each stage of the Anglicare Lober Square project.